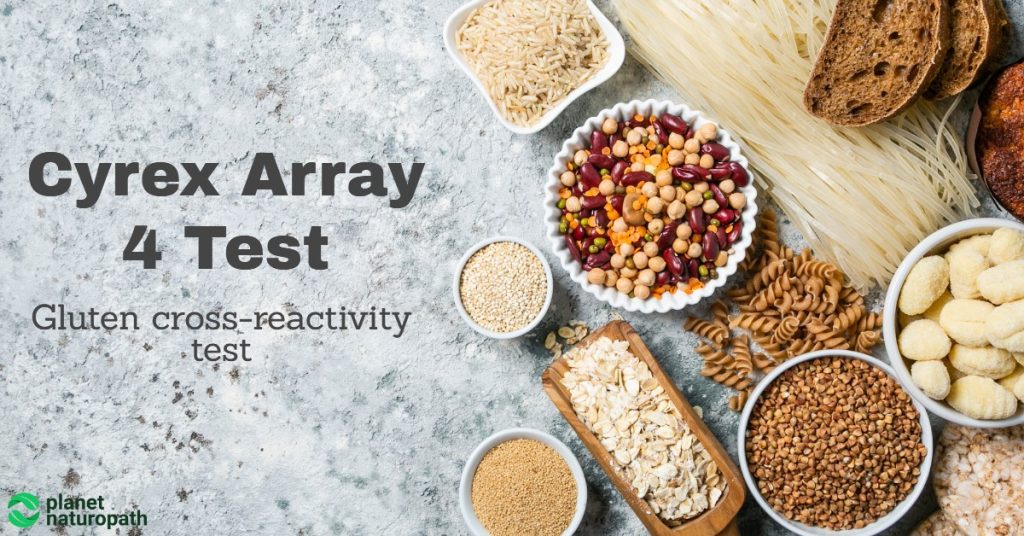 Starting a gluten-free diet is hard, particularly when you've been so used to eating breads and other wheat products. And when cutting them off of your diet still results in headaches, brain fog, and digestive issues, the frustration doubles.

This is when the Cyrex array 4 test can be helpful.

If you have eliminated gluten from your diet but you still experience symptoms that point to gluten sensitivity, you're probably experiencing a cross-reaction. It happens when your body thinks you're consuming gluten even if you're not.

To learn how it goes, read on.

What Is Gluten Cross Reactivity?

When you're gluten sensitive, it means that your body targets gluten and considers it dangerous. Each time you get exposed to it by consumption, your system starts creating antibodies to fight it off.

However, there are cases when the immune system gets confused and starts targeting molecules having a similar structure to gluten. It produces antibodies that trigger inflammation, resulting in the same set of symptoms you'd experience after eating gluten.

The most common culprit?

Dairy products, particularly casein. It's a protein that's quite similar to the protein you'd find in gluten.

In addition to dairy products, the other five most common gluten cross-reactive foods include corn, oats, millet, rice, and yeast.

When you have celiac disease, you have an autoimmune reation to gluten. Over time, the immune reaction your body experiences with prolonged exposure causes the lining of your small intestine to become damaged. Failure to get it treated can lead to malabsorption and a wide range of symptoms.

Then, there's gluten intolerance or non-celiac gluten sensitivity. Its common signs include bloating, fatigue, diarrhea, nausea, gas, neurological symptoms and general inflammation. These signs are most likely to appear after eating foods with gluten.

At first glance, the first thing you'd find similar between the two is the negative response the body experiences after getting exposed to gluten. However, they are different in terms of consequences.

If you are gluten intolerant, consuming gluten can cause belly pain and bloating. If you have celiac, the same action can cause your immune system to attack your own body tissue.

If you have celiac disease, your body produces anti-tTG and anti-α-gliadin antibodies. They can be detected in the standard test for celiac disease, or with the Cyrex array 3 test.

If you have non-celiac gluten sensitivity, you'll test negative for these antibodies, but the Cyrex array 3 will show why you are reacting.

Therefore, if you are gluten sensitive, you may not experience gluten cross-reactivity. It's more likely to happen in people suffering from celiac disease.

Because of this, a lot of people with gluten cross-reactivity struggle to get a definitive diagnosis. And without the right diagnosis and treatment plan, you may end up with additional intolerance and autoimmunity.

The classic symptoms of celiac disease and gluten reactivity include the usual malabsorption syndrome and a range of symptoms targeting any body system or organ. The manifestations can appear at any age.

In infants, the typical symptoms include anorexia, failure to thrive, diarrhea, and abdominal distention. Signs of psychomotor impairment or muscle wasting are quite common as well.

In childhood, patients often experience loss of appetite, diarrhea, and constipation. Osteoporosis, anemia, and short stature are usually present too.

And in adults, symptoms can range from neuropsychiatric symptoms like depression and anxiety to infertility and digestive issues.

What Is Cyrex Array 4?

Cyrex Array 4 tests for gluten-associated cross-reactive foods as well as food sensitivity. It's designed to help you understand why you're still experiencing symptoms even after starting a gluten-free diet. It points out foods that you may be sensitized to.

This test is highly recommended for people who are currently suffering from celiac disease or non-celiac gluten sensitivity. People who have gut dysbiosis without signs of improvement after starting standard therapy should consider taking it too. Those who are non-responsive to a gluten-free diet need to be tested as well.

What Does Cyrex Array 4 Test?

An IgG panel will test for potential cross-reactivity with rice, oats, millet, dairy, corn, and yeast. Additionally, it will also assess for cross-reactivity to foods that are over-consumed or newly introduced after starting a gluten-free diet.

In addition to the six common gluten-reactive foods, you should also watch out for: Fasting isn't required for the test. However, a blood draw is necessary. Cyrex will help you find the nearest center to get it done and you won't have to pay extra for it. However, if you decide to have a phlebotomist come to your home and complete the draw there, you may be required to pay the draw fees.

After the samples are sent to the lab, you can expect to get the results in 14 business days.

How Is It Used?

Cyrex Array 4 Test is usually effective on its own. However, there are circumstances when additional tests, like Array 2 and Array 3, may be required.

Imagine being diagnosed as gluten reactive. To treat your condition, you'll be asked to start a gluten-free diet. If you experience improvement, then great! You'll need to continue the diet to avoid symptoms.

If not, you'll need to take the Array 2 test. It determines if your intestines are permeable to large molecules that trigger an inflammatory reaction in your immune system.

Now, if your Array 4 tests positive, your practitioner can help you come up with the right diet for you. And if your condition improves, you can just stay on the course. Otherwise, you'll need to take out all cross-reactive foods from your diet. If that fails to work, you can take the Array 2 test or the GI Map stool test.

You'll need to avoid including reactive foods in your diet until your gut is completely healed. Once improvement has been established, you can slowly reintroduce the foods. Take note that it should be done on a rotation after your gut recovers.

Wait at least two months on this rotation diet. After such time, you can take the Array 4 test again.

If the antibodies have normalized, you can continue with the diet. However, if the results are still abnormal, you’ll need to avoid the foods for life.

For the best value I would recommend doing the Cyrex Array 2 & 3 & 4 combination.