What is the connection between low testosterone and EMFs (electromagnetic frequencies)?

Over the last 30 years since we’ve been using cell phones, testosterone levels have decreased at least 1% each year.

This article looks at the connection between testosterone and EMFs and what can be done about it.

By the way, don't worry, you don't have to ditch your smartphone and move to a mountaintop (there's probably a wireless connection there anyway).

Read on to find my solution to minimizing EMF damage from cell phones.

Quick Navigation
Male Infertility Crisis in Modern Society
EMFs Can Be Harmful
Do You Want to Dig Deeper into EMFs?
How the Damage of Testicular Cells is Happening?
It’s Not Just Cell Phones Can Damage Our Balls!
Cell Phone Usage Plays a Key Role in the Growing Erectile Dysfunction (ED) Epidemic
Testosterone and EMFs - So What Can We Do About It?
References 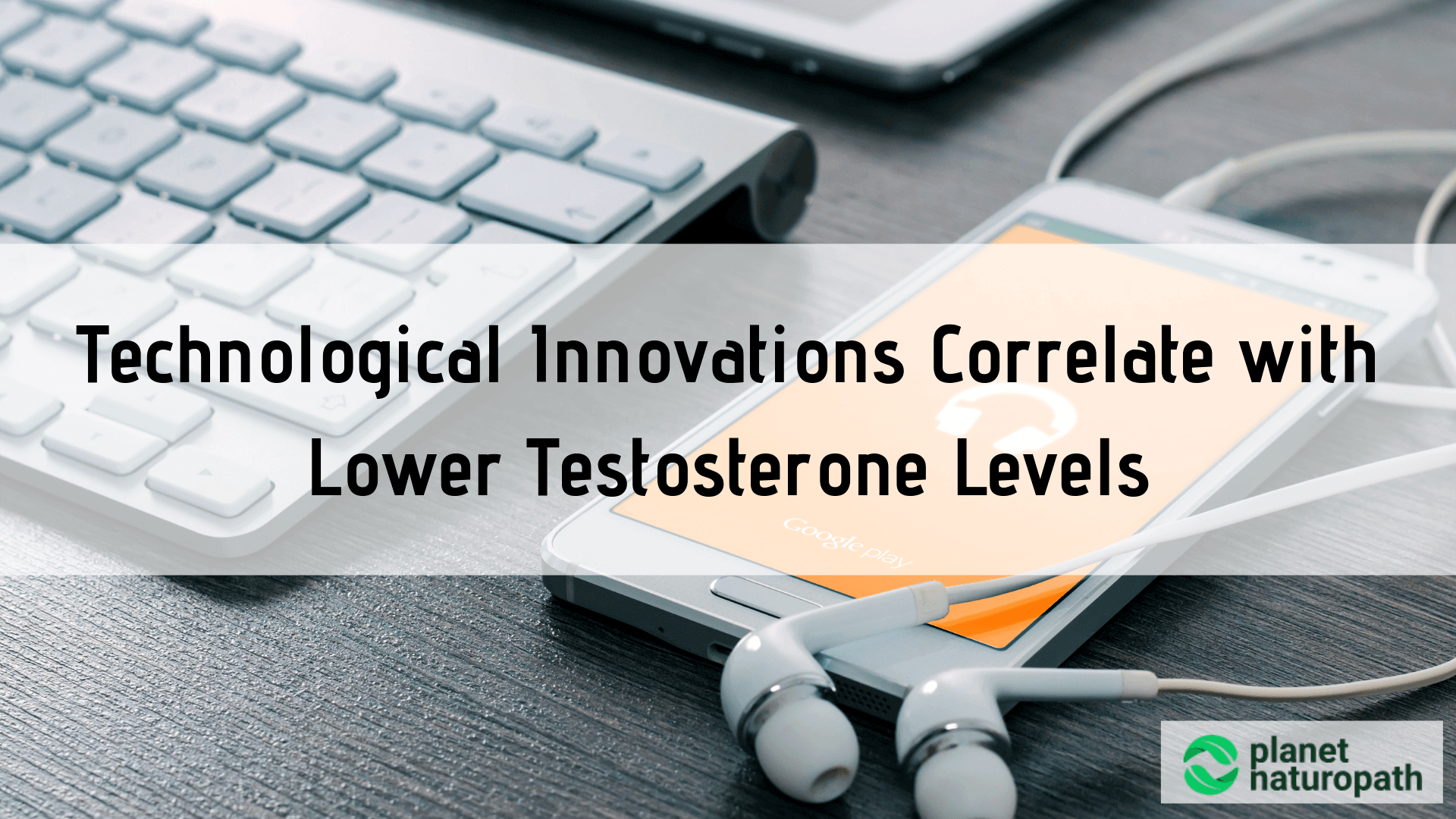 There are different causes of low testosterone and infertility:

However, the main reason why sperm counts are dropping for men today is daily exposure to EMFs. These are the factors that affect male fertility.

The percentage of men (including young men) with trouble getting or maintaining an erection has significantly increased. Since we’ve been using cell phones, testosterone deficiency has become a common issue for men all over the world.

EMFs Can Be Extremely Harmful

Numerous published studies dating back to 1971, including by the Naval Medical Research Institute, have proved negative influence of EMFs on the male testicles, one of the most vulnerable parts of the human body.

Electromagnetic radiation is a threat to men's health, it can cause:

A 2005 study (and replicated many times) showed that extremely low frequency (50Hz) radiation, like that emitted by power lines, can cause major damage to the inner structures of testicles in rats:

The boundary tissue was found disrupted at various layers, showing infoldings which were due to the loss of collagen and reticular fibrils. These results suggest that EMF exposure may cause profound changes to testicular function leading to pathological changes, and subfertility and eventually infertility.

Keep in mind that 50Hz EMF is many times weaker than a 4G cell phone at 1.8Ghz, and the fact that the phone is kept and used very close to the boys.

Another independent study done in 2005 showed that EMF from cell phones caused similar damage to testicular tissues and the ability to produce testosterone at normal levels, measuring significant decreases in bioavailable testosterone.

Again in 2015, the Bioelectromagnetic Laboratory in India also found that testosterone levels were significantly decreased when exposed to EMFs similar to those emitted by modern WiFi routers.

Dr. Ashok Aggarwal, of the Cleveland Clinic and the leading fertility expert, has researched this issue for decades and also concludes that EMF from cell phone is a major factor in societal decreases in sperm count and quality.

This is just a brief statistics of how EMFs impact men's health. 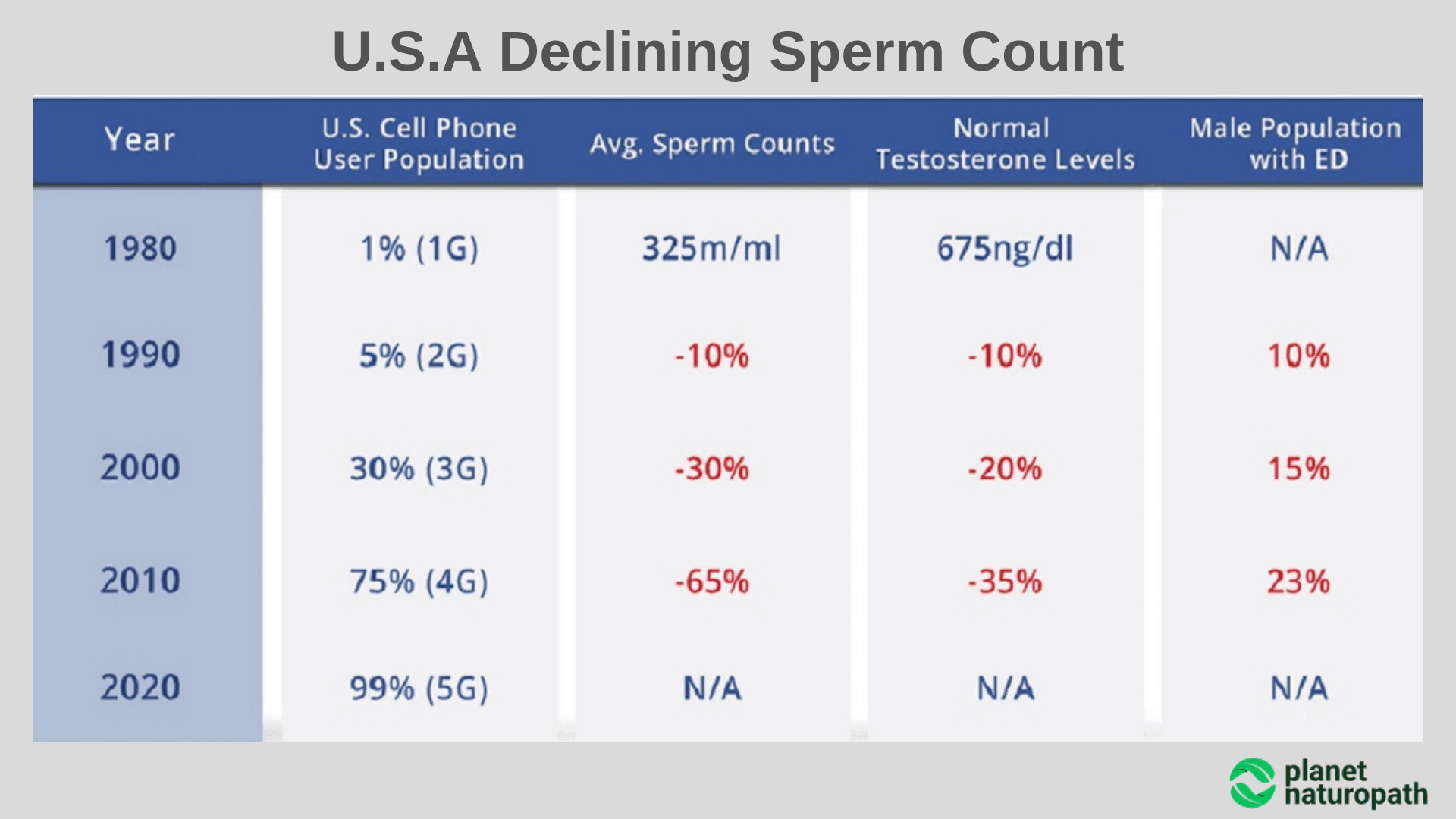 Do You Want to Dig Deeper into EMFs?

If you'd like to learn more about EMFS and low testosterone, I highly recommend to read "The non-tinfoil guide to EMFs: How to fix our stupid use of technology" by Nicolas Pineault. 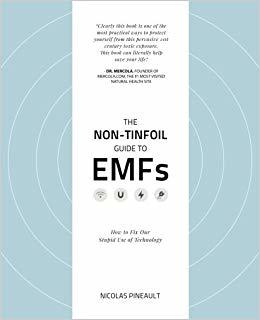 The Non-Tinfoil Guide to EMFs

You'll find out why carrying a cell phone in your pocket is harmful and how to reduce your exposure to wireless technologies.

How the Damage of Testicular Cells is Happening?

It happens though, because the scrotum is filled with conductive fluids, and hold the highest dielectric constant in the body. And as far as the scrotal skin has no surface fat for resistance, the EMFs easily penetrate the scrotum and then the cells at a higher rate. In addition, sweaty balls exacerbate absorption!

Also, Martin Pall,  a world-renowned biochemist, has linked EMFs to the overloading of calcium in human cells. His research on the voltage-gated calcium channel in 2013 informs us that EMF absorbed by the scrotum causes abnormal calcium levels and oxidative stress in testicular cells.

The EMF radiation causes damage of cell membranes and disrupts the calcium cells use in intracellular communication. Due to the radiation, the tissues become heavily damaged, resulting in lower energy, reproductive function abnormalities, and even increasing the risk of birth defects and cancer in offspring.

It’s Not Just Cell Phones Can Damage Our Balls! 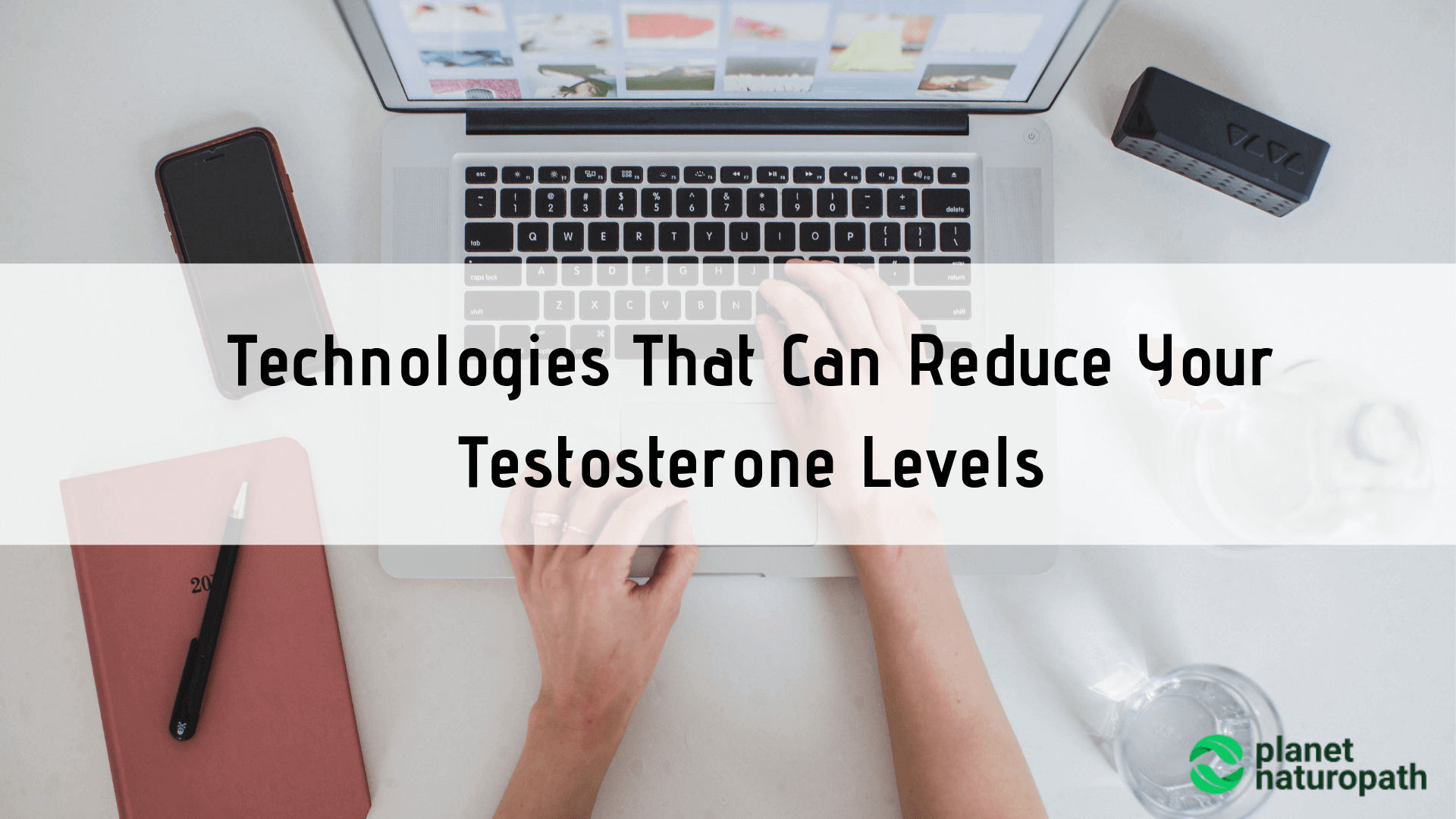 Consider, it’s not just when phones are carried in pockets, we expose the testicles to electromagnetic radiation. These are a few more cases from our daily life:

While many studies show EMFs emitted by devices using 4G and prior generation wireless technologies are undoubtedly harmful, very little to no research has been done on the effects of modern wireless technology networks such as 5G.

Our living environment seems to be impossible without advanced cell phones, 5G, and other further generation technologies.

We have been using cell phones for several decades, yet it might be not enough to fully understand their impact on our health, particularly, erectile dysfunction. However, many studies have already proved the connection between cell phone radiation and ED.

One of the great examples is a study published in the Central European Journal of Urology by medical researchers in Egypt and Austria. According to their research, men with erectile dysfunction carried cell phones in their pockets for almost three more hours per day than men without impotence.

In another study, scientists found out that men with erectile dysfunction were more likely to carry their cell phones in their front pockets.

Each year new researches and investigations are conducted to measure exposure to EMFs and how to deal with its effects and prevent possible health issues.

Testosterone and EMFs - So What Can We Do About It? 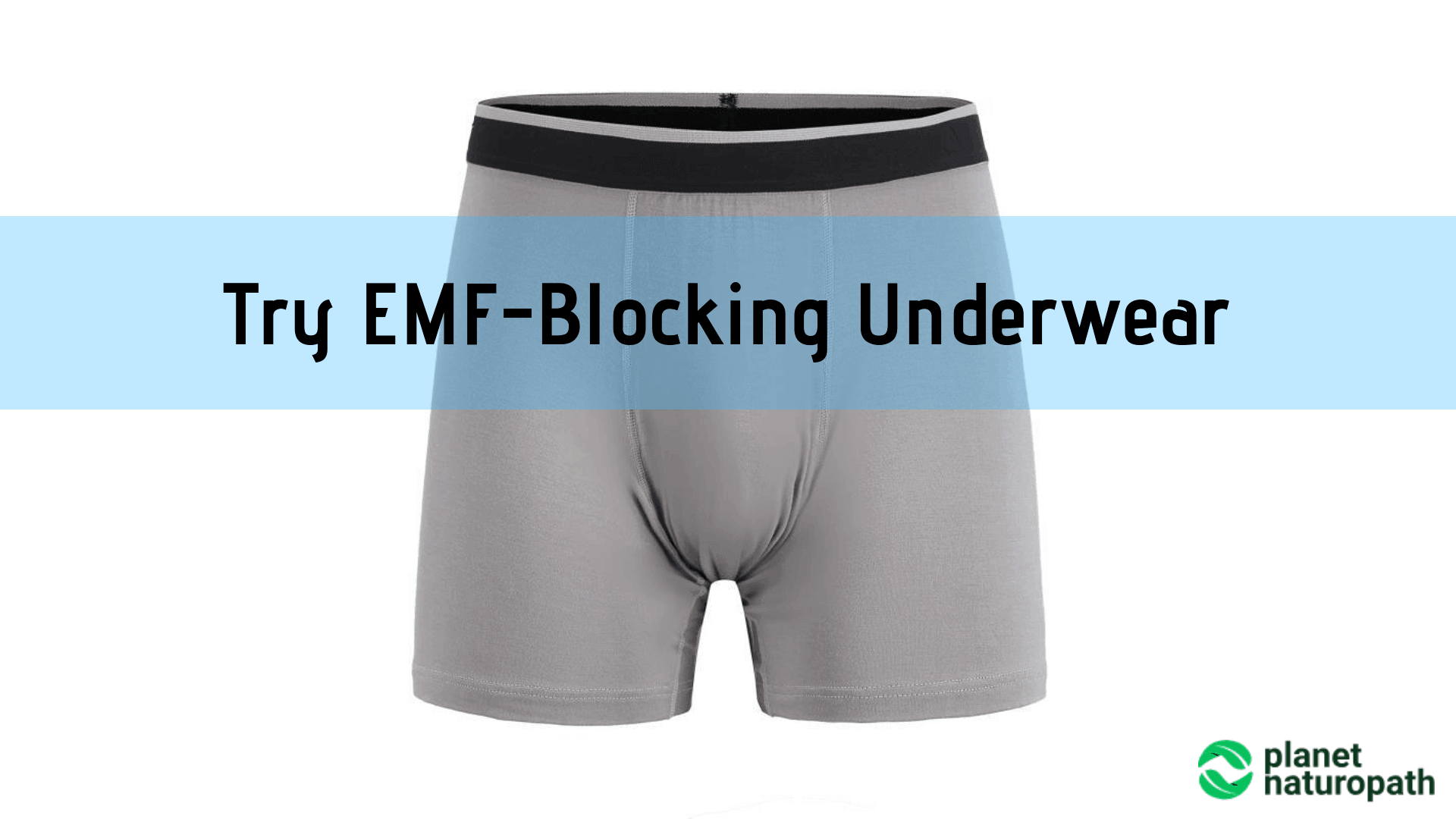 I have personally been wearing "Fonz underwear" for the past year - I discovered them when looking for solutions to minimizing EMFs from cell phones and international flights.

Although the boxers look quite simple and minimalistic, there is a number of benefits of using this underwear.

Use Code NATUROPATH for 10% off

The crown jewels are important not just for you, but for your family. Start protecting yourself, your wife, partner, and your future children that will be thankful.