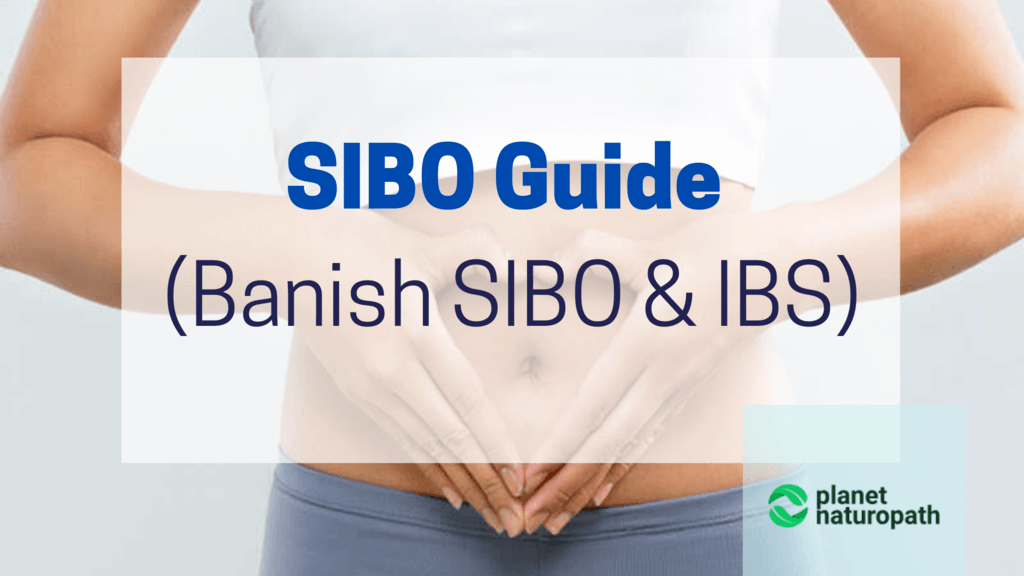 Irritable bowel syndrome is commonly known as IBS and it is estimated that this affects around 11% of the population - SIBO is the main cause of IBS and as many as 60-80% of people with IBS have SIBO.

Have you been told you have IBS and you will just have to put up with it?

Have you tried increasing fiber or adding probiotics only to find that your IBS symptoms are worse?

If this sounds like you then you may have SIBO.

In this SIBO guide, we are going to break down the step by step process to see if you have SIBO and what are the best treatment options for SIBO.

First, let’s look at what SIBO is, what causes it and how to identify if you have SIBO or if your gut issues are caused by something else.

What is SIBO (and what’s the connection to IBS)

SIBO stands for Small Intestinal Bacterial Overgrowth and while it is coming to the attention of more and more doctors, for many doctors it is not on their radar as they were not taught about SIBO in medical school.

Much of the research into SIBO has taken place in the last ten years, so unless your doctor is keeping up with the latest research they are probably not testing you for SIBO, and if you have digestive symptoms you are probably given the label of IBS.

The bacteria in the small intestine can ferment fiber and starches from the carbohydrates you are eating, this produces gases that damage the small intestine, and cause symptoms such as bloating, pain, diarrhea, constipation, and reflux.

Do these symptoms sound familiar? They are all of the symptoms of IBS, so if your doctor does not test you for SIBO and can find nothing else wrong then you are labeled as having IBS - rather than given a step by step treatment plan.

This can be frustrating, especially if you have had a colonoscopy, gastroscopy or an ultrasound and they can’t find anything wrong - that is because these tests can only identify structural or physical issues like gastritis, polyps or cancer

While it is great to rule out serious pathologies these types of tests don’t identify SIBO. 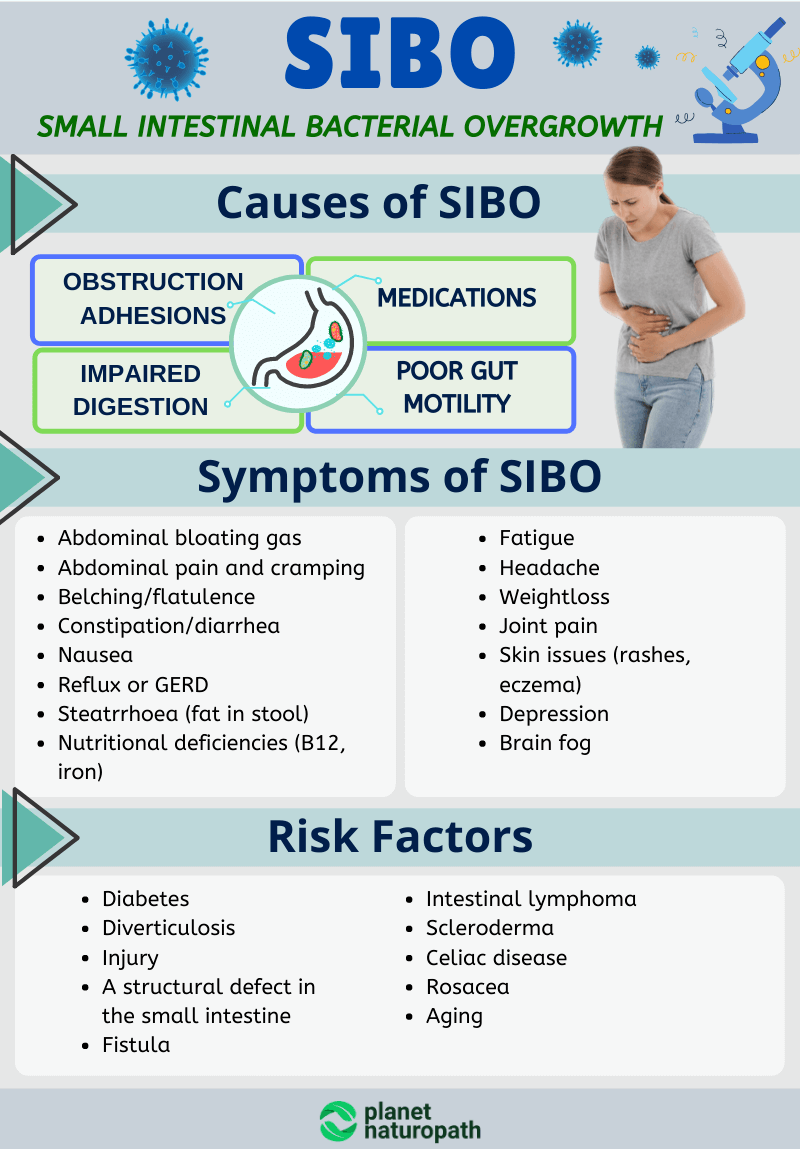 As well as the digestion symptoms listed, SIBO can also cause a number of other digestion problems.

Besides the specific digestive symptoms that SIBO can cause it is also associated with a wide range of other health conditions. 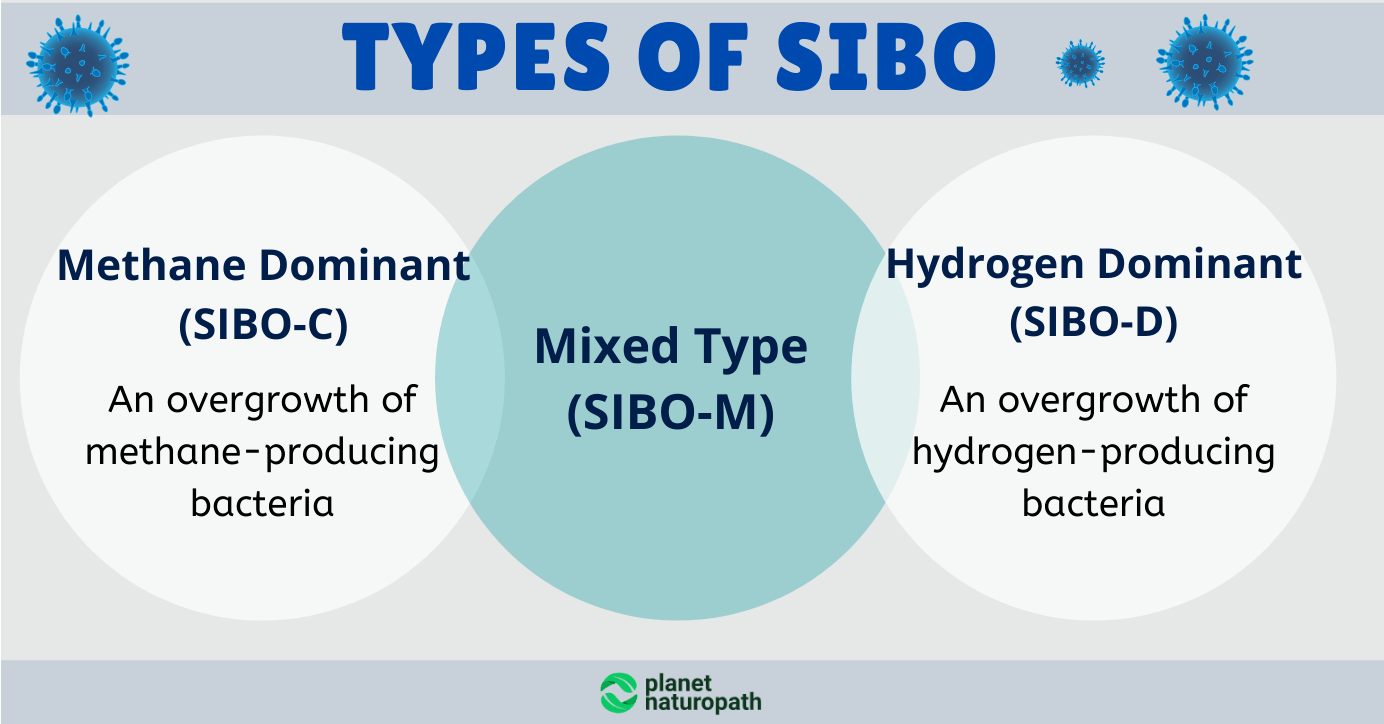 There are two main types of SIBO.

The gases that are predominant in SIBO:

There are several causes of SIBO from food poisoning to physical adhesions and identifying the underlying cause is important for long term treatment success.

Here are the 4 key areas that can lead to SIBO

Diagnosis of SIBO and IBS

The best way to diagnose SIBO is with the lactulose breath test, but there are also other signs and symptoms that can be present to help you identify if SIBO is the cause of your IBS symptoms

While these signs and symptoms can give clues to whether you have SIBO the best way to diagnose is with the lactulose breath test. Sometimes glucose is used to assess SIBO but this is absorbed in the upper part of the small intestine so it may lead to more false negative results.

SIBO Preparation Guidelines- what to avoid

1 month prior to testing:

1 week prior to testing:

NOTE: proton pump inhibitors are no longer to be discontinued but you can stop one day before testing.

This is where it pays to work with an experienced practitioner as SIBO test results are not always “black and white” and can be open to interpretation.

Also, different labs will have different reference ranges and it is important to take into account your signs and symptoms, the level of bacteria rise and when that bacteria rises during the testing period.

The key things to focus on with SIBO results:

Other Tests to Consider (NOT Diagnostic for SIBO)

Organic Acids Test as this is one of the best ways to assess candida and it can also show other markers indicative of SIBO. This is also a good test to assess for reasons behind fatigue and mood problems.

Blood tests - low chloride could indicate hypochlorhydria (low stomach acid), high folate is possible because of increased bacterial production and low B12 due to poor absorption.

GI-MAP stool test can also be helpful in assessing the health of the large intestine, plus other intestinal health markers like digestive enzymes, SIgA, fecal fat and Zonulin which can be impacted by SIBO.

You can also sign up for the SIBO Success Plan, 8-lesson course with Dr. Nirala Jacobi.

Other SIBO diet options that I use with clients are the low histamine and low sulfur versions of the SIBO diet.

The vegetarian version of the SIBO diet is great as I find that a lot of vegetarians can have SIBO due to the high fiber that comes with a vegetarian diet.

Aim of the SIBO Bi-Phasic Diet

The SIBO Bi-Phasic diet is not a long term diet and ideally, this will be a 10-12 week plan with more and more foods being able to be added in as the treatment plan progresses.

For some people, as they reintroduce foods into the diet they may notice that certain foods can trigger symptoms, if this is the case these foods need to be eliminated and we can try adding them again later.

Phase 1 of the SIBO diet is the most restrictive.

The aim of phase one is rapid symptom relief, once symptoms improve by 50-60% we can then start to reduce foods from phase 2.

If someone is already very underweight I might only do phase 1 of the diet for a few days and then introduce more carbohydrates in the form of plain white rice.

NOTE: It is important to be cautious of someone has a history of eating disorders if they are planning to do the SIBO diet, they may be advised to do a modified version of phase 2 so that it is not so restrictive.

Phase 2 of the diet is less strict. 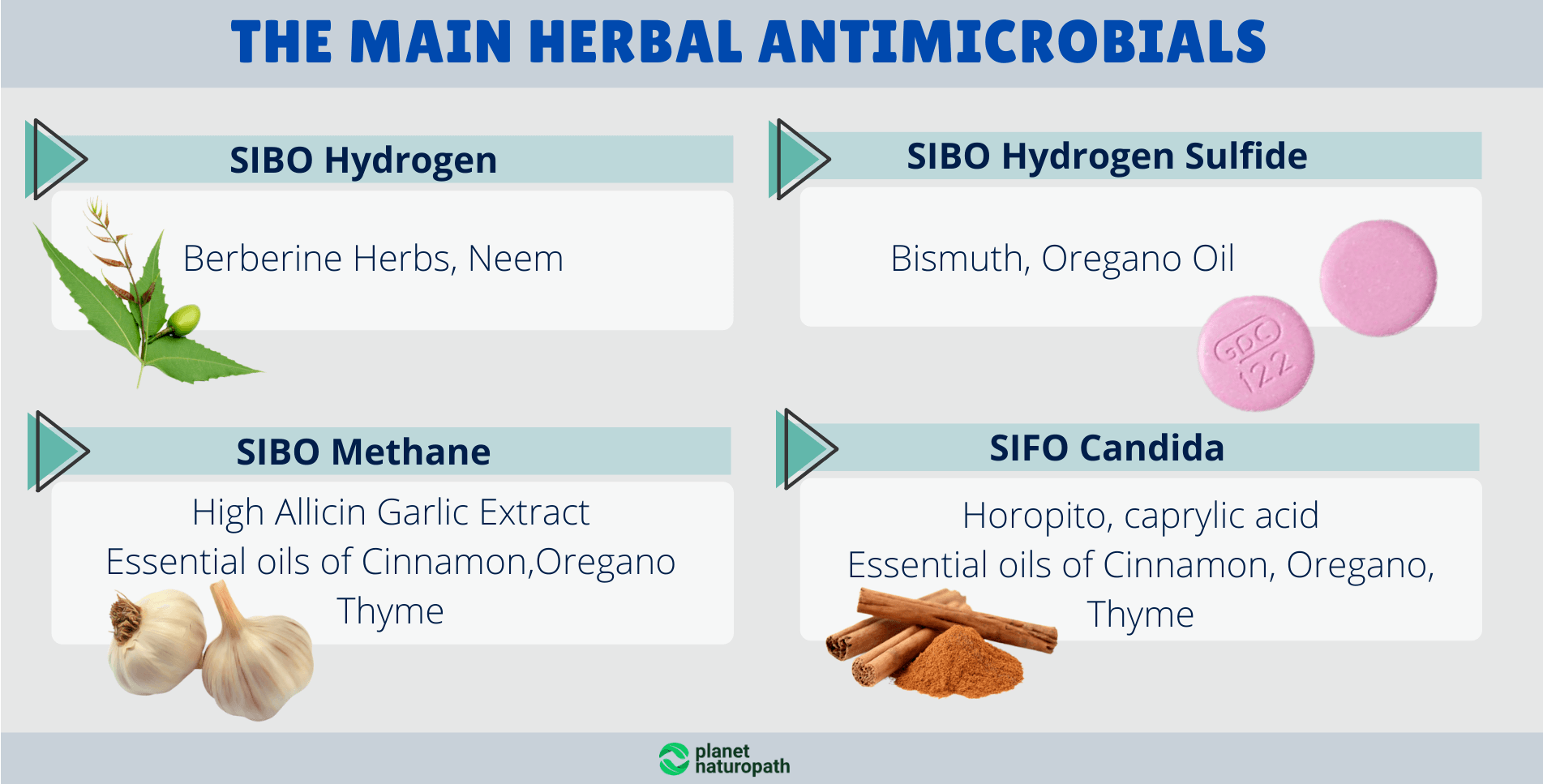 Herbal and Nutritional Medicines and SIBO - things to consider 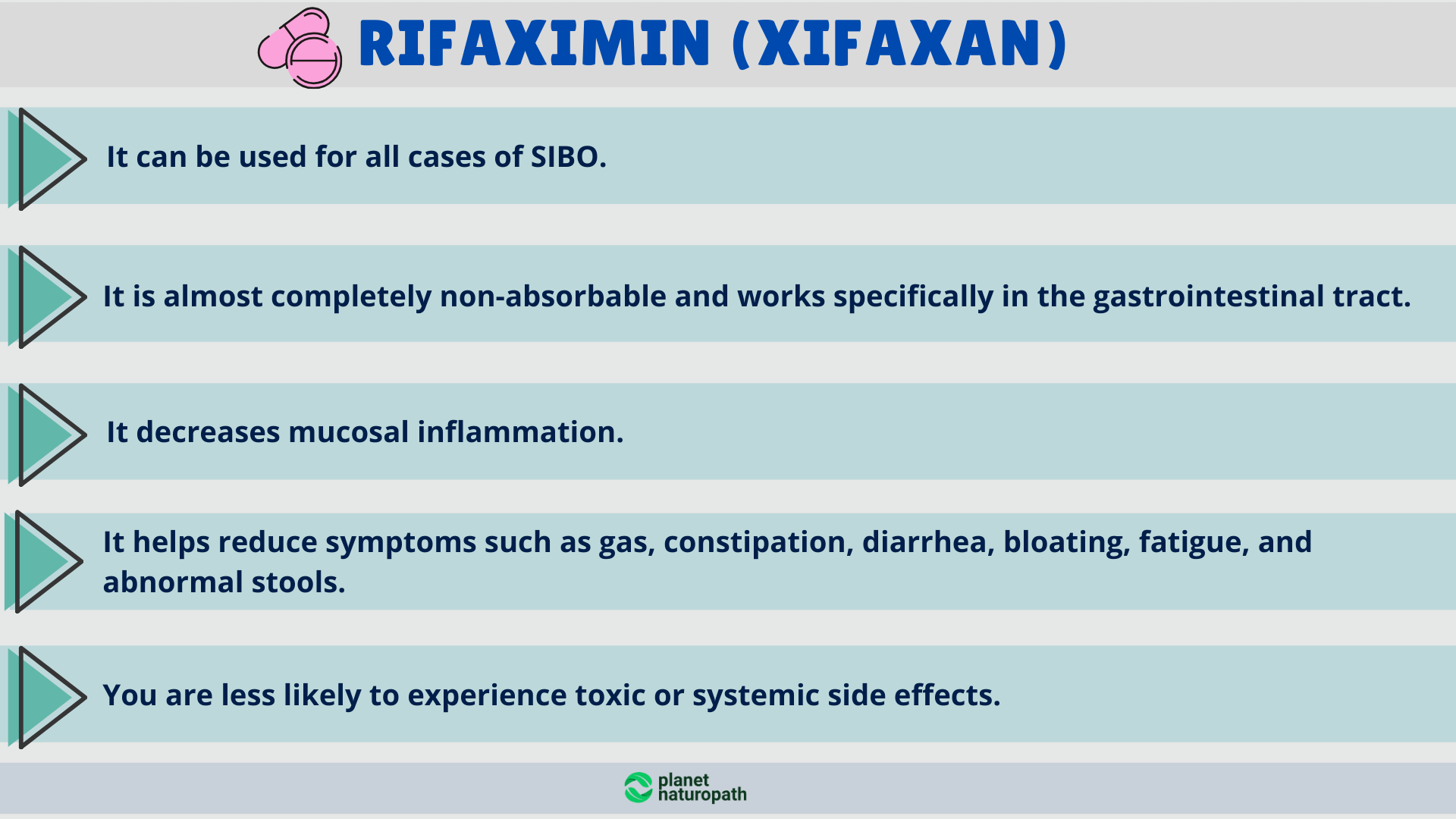 Rifaxamin is one of the better antibiotics available as it mainly works in the small intestine and does not have the negative effects of other antibiotics on your “good” bacteria in the large intestine.

However, to make Rifaxamin more effective it is often combined with another antibiotic like Neomycin or Metronidazole, and these antibiotics can affect the beneficial bacteria in the large intestine.

Rifaxamin is more effective for hydrogen dominant SIBO, and its benefits have shown to be enhanced when using Partially Hydrolyzed Guar Gum (PHGG)

A typical Rifaxamin treatment is for 2 weeks which is probably why it does not have a high success rate as often a 4-week treatment is needed.

One of the negatives of Rifaxamin is that it does not address fungal infections which are also present, so you may want to consider adding in an anti-fungal treatment at the same time.

The Elemental Diet is one of the most effective treatments for SIBO, but it is not always my first choice of treatment as for many people it is difficult to follow.

The Elemental Diet is a complete liquid meal replacement using a specially formulated combination of free form amino acids, rapidly absorbed glucose and MCT or another type of quality fat.

This formula is rapidly absorbed in the upper part of the small intestine so essentially it starves the bacteria of any food but still provides enough calories and nutrients for the patient.

It is not a low-calorie diet but because you are consuming the same liquid formula for two weeks people often struggle to have enough calories in a day so it can lead to weight loss and is mentally challenging to do. So the Elemental diet is not ideal if you are already underweight.

The Elemental diet is done instead of herbal antimicrobials or antibiotics, but sometimes in difficult cases, I have done herbs either before or after the Elemental diet.

There are several commercially available formulas and while they are quite expensive you need to remember that you are not eating any other foods at this time - it is also possible to make your own Elemental diet formula and Dr. Alison Siebecker shares her formula online.

Die-off, also known as a Hercksheimer reaction is a massive increase in lipopolysaccharides (LPS) and other bacterial and fungal toxins as these organisms die and this can lead to fatigue, headaches, diarrhea in the first few days of treatment.

Not everyone experiences die-off and many people think that it is a reaction to the supplements.

The best option is to reduce the supplements and then very slowly increase the dose to the therapeutic dose, this helps to minimize symptoms.

Other options to improve the bodies detoxification pathways and minimize the negative effects of die-off include:

What if SIBO Symptoms are Not Improving?

Many people get significant improvement in the first month or two of treatment, especially with bloating and stool quality, but what if you not seeing improvement, what can be done?

The first thing I check is to make sure that the supplement dosage is correct and that a biofilm agent is being used as this is a common reason for people not getting results with their treatment.

If you have not already done a stool test like the GI Map and/ or the Organic Acids test then this is a good idea to assess for other possible infections like candida or mold.

Other infections like Helicobacter pylori, mold or Lyme disease can also affect treatment outcomes so assessing if these could be contributing factors is a good idea.

If constipation is the main symptom making sure that you address motility is important - hormone issues like low thyroid function can affect motility and should be ruled out if you have chronic constipation.

You may need digestive enzymes, betaine HCL or bile support.

Sometimes we just need to switch around the treatment plan, for some people different herbal formulas will be more effective - this is why I don’t recommend one particular brand of supplements as there are many different options that can work.

Finally, stress can be a big factor in not progressing with treatment and there is a big connection between gut health and the brain. There are a number of different things that you can do to help address this like meditation, breathing exercises and a great program is the Gupta Program which helps to retrain the brain.

Stress affects the Vagus nerve and the Gupta program focuses on improving the gut/ brain connection.

SIBO and Healing the Gut 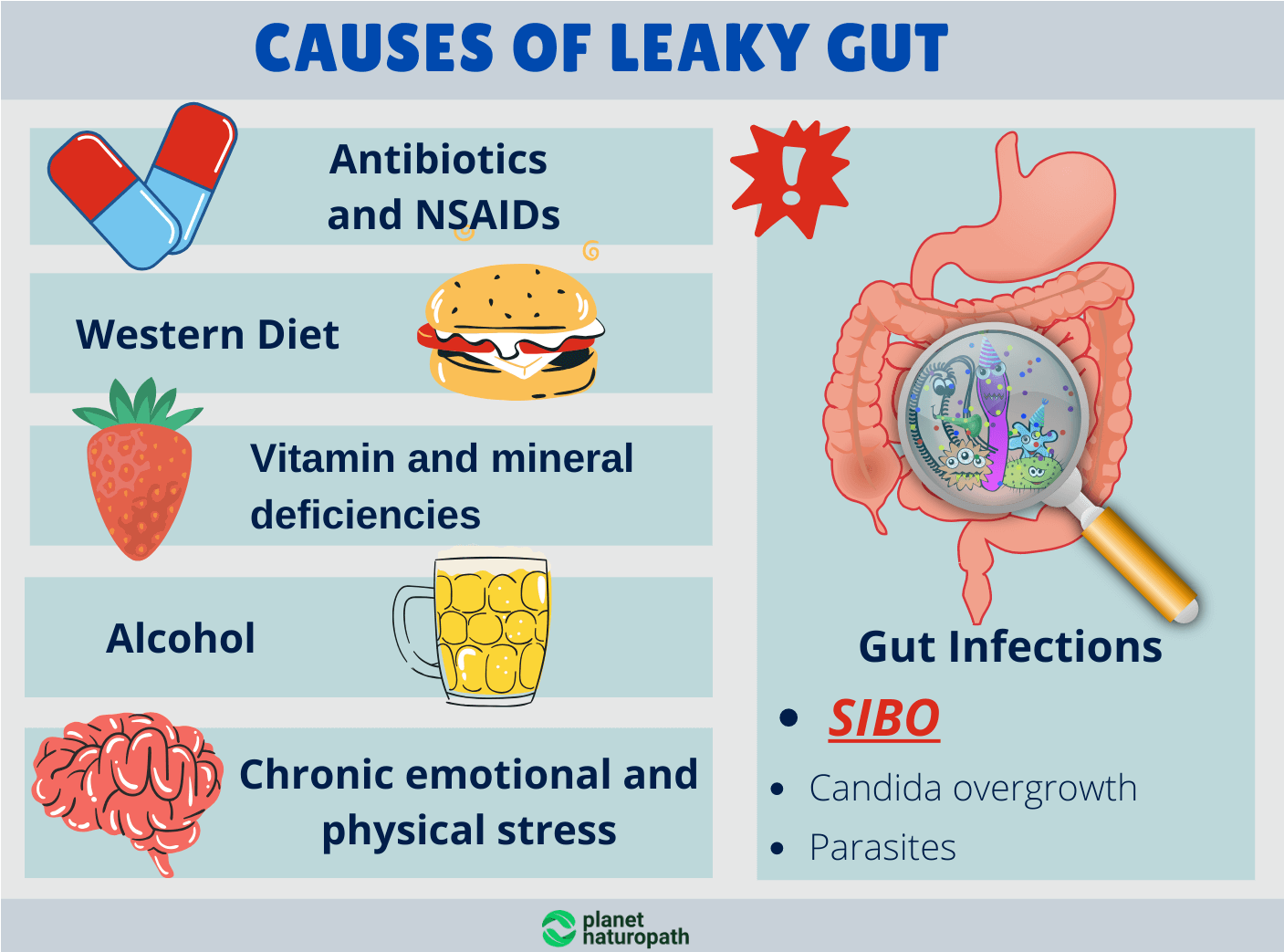 The small intestine has a single layer of epithelial cells covered by mucosa, this can regenerate every 5 days and help to protect us from microbial invasion.

The gut lining can be affected by:

It is these last two, that we are concerned about with SIBO because of the overgrowth of bacteria and LPS that can damage the small intestinal mucosa.

Leaky gut is one of the reasons why gut infections can cause a wide range of symptoms not relating to your gut health.

The first step is to remove the underlying cause, whether that is SIBO, medications or a food intolerance as it will be harder to fix if the underlying trigger is still there.

Nutrients for a Leaky Gut

Natural Fibromyalgia Treatment (a guide to eliminate your pain)

Testing For Leaky Gut (and the cause of leaky gut)