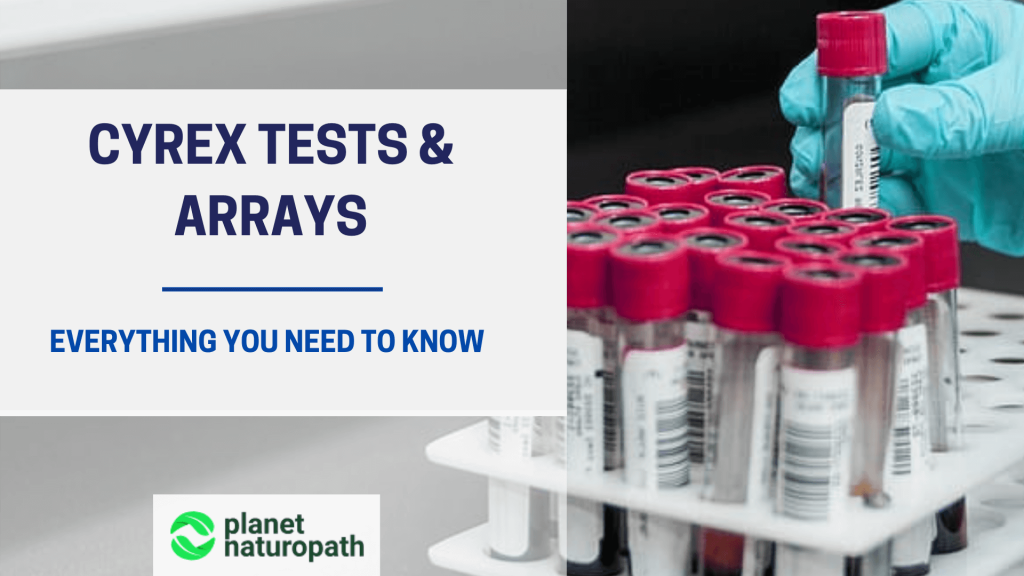 Cyrex Tests: 9 of the Most Popular Options

There are a number of different Cyrex tests called arrays,  you can start with one test or do a combination to help identify underlying health issues. If you get the results from a Cyrex test and then you decide that you want to add more tests this can be done with the original blood sample within the first 2 weeks.

Here is a list of the common Cyrex tests, these tests are available worldwide but the lab is located in the U.S.A and the prices are in USD.

*If you are outside of the U.S extra shipping charges will apply, contact michael@planetnaturopath.com to get the price in your country.

Note: Testing is not available in the state of New York

Intestinal permeability, commonly known as the leaky gut is a condition where the intestinal wall lets undigested food particles or other substances pass into the bloodstream.

There are a few known antigens present with intestinal permeability and those include Actomyosin, Occludin, Zonulin, and Lipopolysaccharides (LPS). These markers can help to identify the underlying cause of leaky gut which can help with your treatment plan.

The Cyrex Array 3X is designed to distinguish between celiac and non-celiac gluten sensitivity, the Array 3 is the only wheat/gluten panel that tests for three antigen triggers: gluten proteins, opioid peptides, and tissue binding isolates.

In total the Array 3X tests for 32 different markers instead of the two markers reported on the standard gluten test done at your doctor's office.

To do this test you need to be eating gluten products for around 4 weeks before the test, so if you have already eliminated gluten from your diet you either need to reintroduce gluten before testing, or continue to avoid it but don’t do the test.

This test is ideal for people with chronic health issues but they are unsure if they are reacting to gluten or not, sometimes people can have zero digestive issues but still be having an immune response to gluten that can cause other health issues. 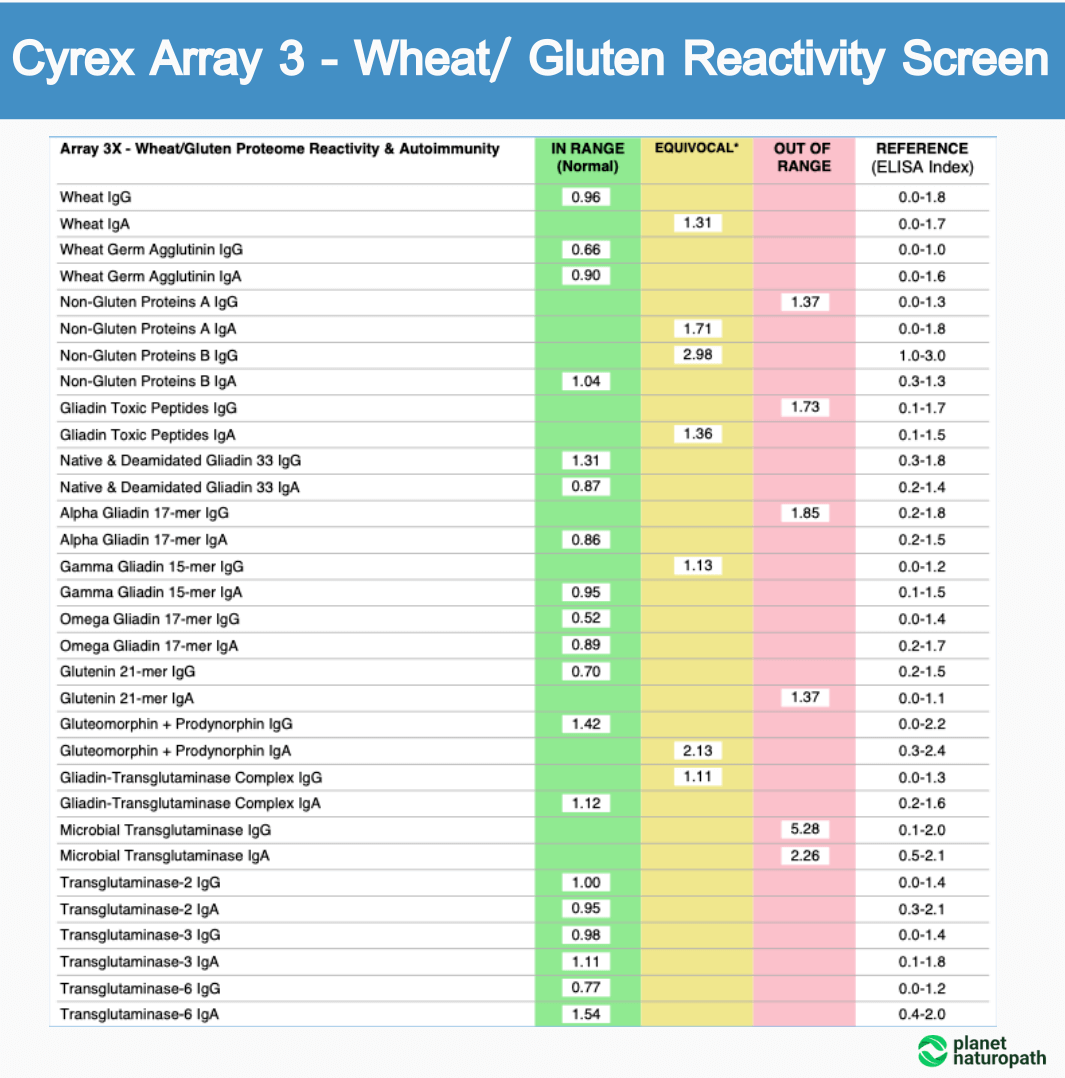 In cross-reactivity, the body may mistake another food for gluten and react in the same way you would react to gluten.  Array 4 tests for 24 different foods that may be causing cross-reactivity or are newly introduced to the diet or over-consumed favorites.

It can be frustrating to eliminate gluten from the diet and see some improvement, but you suspect that there could be other foods that are triggering similar reactions to gluten. Research shows that this can be due to gluten cross-reactivity

One of the most frustrating scenarios for both the practitioner and the patient is when a gluten-free diet fails to have any effect on a person who seems so clearly gluten sensitive. Newer research shows this may be due to cross-reactivity.

Many studies show that autoimmune antibodies can be elevated in the blood many years before symptoms occur. Cyrex Labs have now developed their array 5, a comprehensive autoimmune screen that helps in the early detection of autoimmunity.

If detected early, natural and/or medical interventions can begin in order to minimize long-term illness and promote a better quality of life.

Elevated auto antibodies, known as Predictive Antibodies, are measurable up to ten years before the clinical onset of the disease. Early identification of autoimmunity can help to possibly stop or reverse disease progression. Array 5 looks at multiple tissues commonly targeted by auto-antibodies, including Cardiovascular, Endocrine, Joint, Gastrointestinal, Neurological, and more.

Food intolerances are known to cause multiple health issues connected to the immune system including autoimmune and neurological diseases.

The Cyrex Array 12 tests for 29 different pathogens including candida, molds, bacteria, parasites, viruses, and Lyme disease - all of these can be triggers for autoimmune, digestion, and other chronic health problems.

The blood-brain barrier (BBB) is a physical barrier formed by the arrangement of endothelial cells and tight junctions that line the capillaries which supply blood to the brain. It is a highly selective barrier that restricts the movement of molecules from the blood across to the brain.

The BBB naturally permits the passage of essential metabolites, small hydrophobic (lipid-soluble) molecules like oxygen, carbon dioxide, hormones, etc. Acting as a filter, the BBB prevents the entry of infectious agents, toxins, and other environmental triggers into the nervous system.

Cyrex Tests - The Next Steps

With so many different options with the Cyrex tests it can be difficult to know what the best options are for you - the best option is to schedule a 30 minute consultation so I can assess your health, review previous tests and make recommendations specifically for you.

You can schedule a consultation here

Also it is possible to order 1-2 of the Cyrex test arrays and once the results are back we can order more tests if necessary from the original blood draw, this is especially important if you are shipping tests from outside of the U.S

If you know which of the Cyrex test arrays you would like to order contact tests@planetnaturopath.com and we can get the process started.